Ethereum’s price action has been strikingly similar to that of Bitcoin, and the crypto has been unable to garner any independent momentum This has led ETH to consolidate between $340 and $360 throughout the past couple of days Its reaction to any signs of weakness from BTC has been quite pronounced, which could mean that it will see an extreme reaction to any Bitcoin downturn Analysts are now noting that Ethereum’s market structure looks “abysmal” […]

Ethereum has had a rough past few weeks, with its price forming an incredibly wide trading range between $315 and $380, while its buyers and sellers reach an impasse due to Bitcoin’s persistent bout of consolidation.

Where the cryptocurrency trends next will undoubtedly depend on Bitcoin, as the benchmark crypto has been firmly guiding the aggregated market throughout the past few weeks.

This sideways trading may not last for too much longer, as one analyst is noting that a bearish market structure formed by ETH indicates that a move down towards $240 is imminent in days and weeks ahead.

Ethereum and other altcoins were driven slightly higher this week by Bitcoin’s rebound past $10,700. This rebound has since stalled, which is what caused ETH to plunge from over $350 down to lows of $340.

At the time of writing, ETH is trading down marginally at its current price of $341. This is around where it has been trading throughout the past day.

If it moves lower from here, the next support region to watch exists between $315 and $325, as this is where it has bounced in previous weeks.

Analyst: ETH has an “Abysmal” Outlook, Decline Towards $240 is Imminent

While speaking about Ethereum’s near-term outlook, one analyst explained that he is expecting the cryptocurrency to see a move down towards $240 in the near-term.

“ETH short average has been brought down with the add at $357. It just looks abysmal (which is great for me). Approaching a month in the short position which was to be expected for this move. Very pleased I’ve been positioned and not having to play with the chop.” 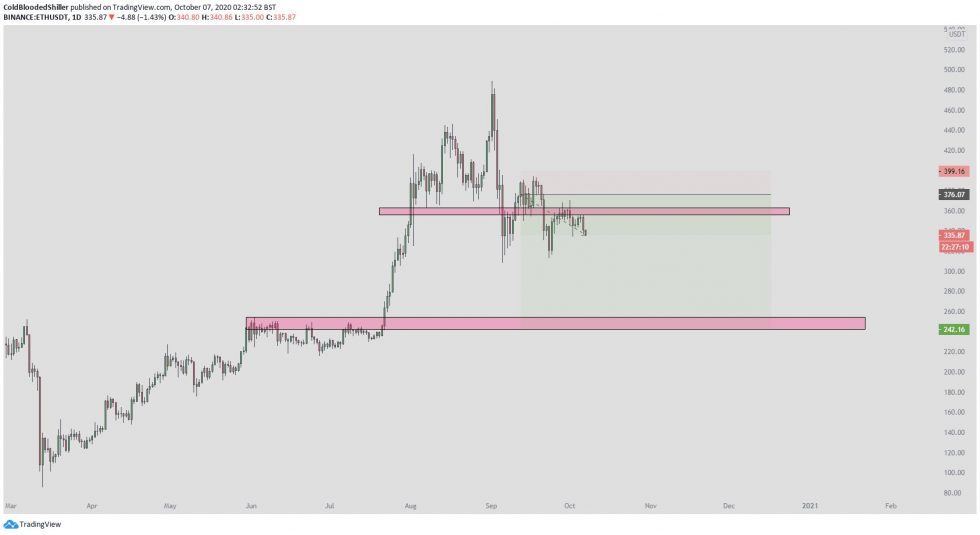 Bitcoin will likely play a role in Ethereum’s future trends, making any potentially imminent ETH decline the result of one seen by BTC.

Cryptoview | One Interface – All Major Exchanges

What Is PlatinumCoin? | Here’s Everything You Need to Know

NFT-powered racing game F1 Delta Time has auctioned off a segment of an in-game...

The original Google Home smart speaker is on sale for $35...

That's a great price on an oldie but goodie. But the Nest Hub smart display for...

Plus, YouTube show Binging with Babish shows how to make your own.

Profoto continues to push its support for smartphones with the launch of AirX Smart-TTL...

Spot gold is inching towards forming a "Death Cross" on its daily chart, which may...

From power tools to kitchen appliances to smart home gadgets, Home Depot is a great...

Photo Series of Incredible Home Christmas Displays is a...

21-year-old Ryan Hernandez, who had been arrested in relation to the theft of “stolen...