Super-wide-angle lenses made for full-frame cameras are usually some combination of big, heavy, slow, or riddled with image quality problems. Usually. The new Sony 14mm f/1.8 G Master lens is trying to go where almost no lens has gone before. The company claims the use cases of its 14mm GM ranges from astrophotography, architecture, and […] 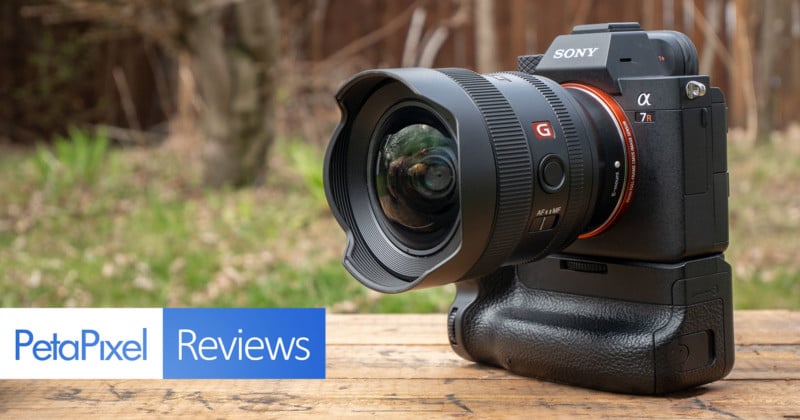 Super-wide-angle lenses made for full-frame cameras are usually some combination of big, heavy, slow, or riddled with image quality problems. Usually.

The new Sony 14mm f/1.8 G Master lens is trying to go where almost no lens has gone before. The company claims the use cases of its 14mm GM ranges from astrophotography, architecture, and landscapes to close-ups and portraiture. To do so, they created a bright, super-wide lens with a short minimum focusing distance and advanced autofocusing motors. It has all the best optics that Sony has to offer in an effort to create something sharp and free of distortion and aberrations. It’s then packaged in a size that is unheard of for all the things just mentioned.

The crazy part is I think they succeeded.

The Sony 14mm f/1.8 GM measures 3.9 inches (99.8 millimeters) long by 3.3 inches (83 millimeters) in maximum diameter. It only weighs 1 pound (460 grams). Yes, feel free to get out the tape measure and scale to confirm that these are indeed some mind-blowing numbers. Take the Rokinon 14mm f/2.8 AF, add one and a third stops to the maximum aperture, add all the best lens design Sony has to offer, and it’s somehow even lighter and almost the exact same size.

I don’t get it either. 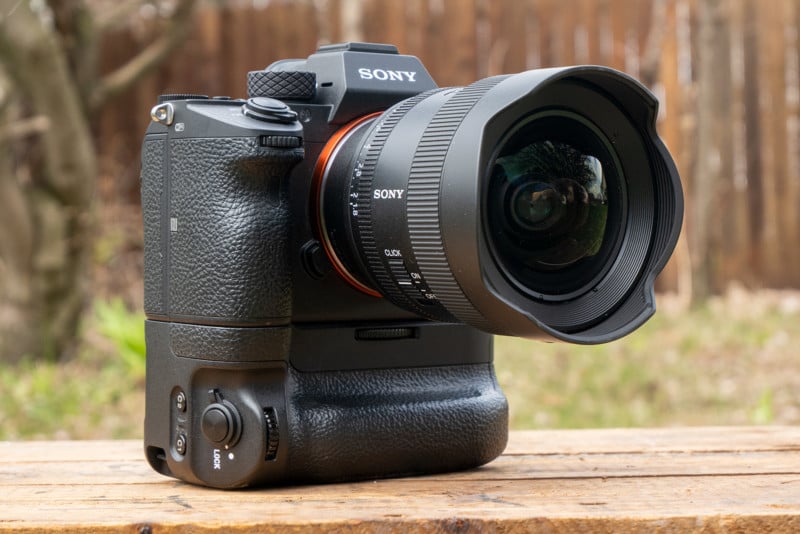 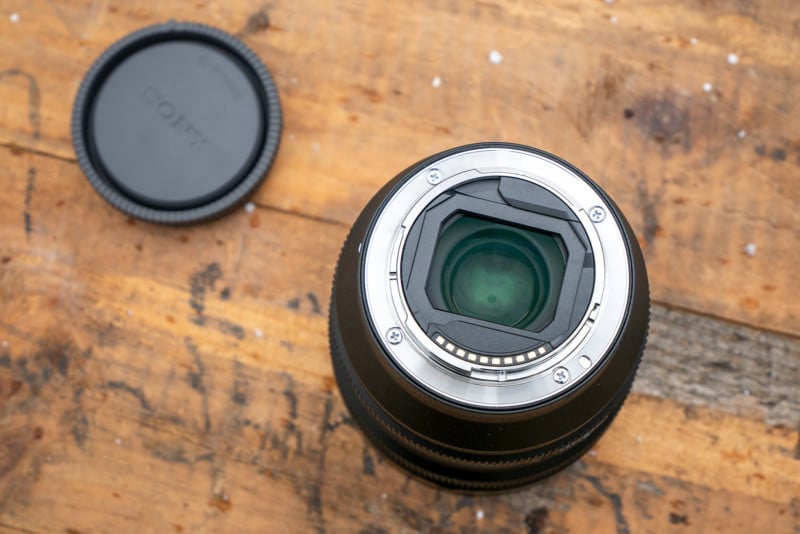 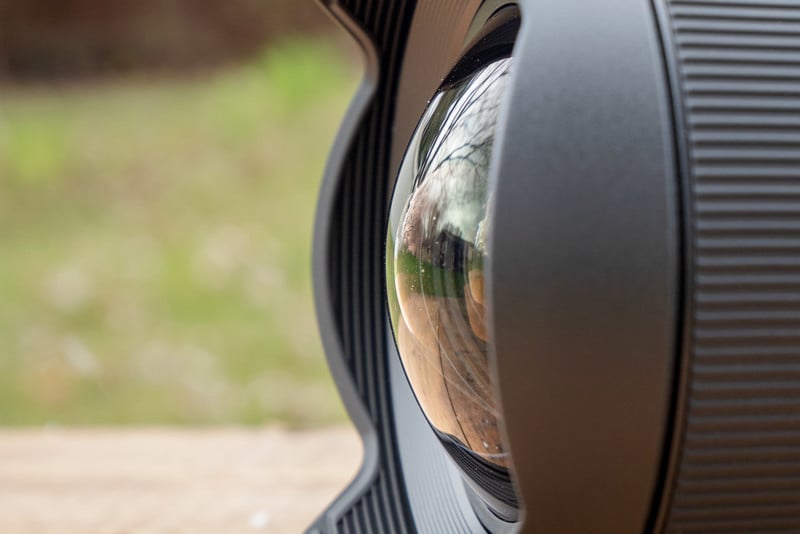 The balancing point of the lens alone is almost exactly right in the middle and on my Sony a7R III with vertical grip and two batteries, the balance is right at the sensor. Sony said that having one of the two XA (extreme aspherical) elements at the front plus the two XD (extreme dynamic) linear focusing motors at the very rear helped to create a lens not so front-heavy as often seen with ultra-wides.

Something it does share in common with other ultra-wide-angle lenses is the bulbous front element and a built-in lens hood. Because of this, there are no front filter threads. Like the Sony 12-24mm f/2.8 GM, the new 14mm GM instead has a rear filter holder that can take third-party gel filters cut from a template.

There’s the plastic housing, plastic non-removable lens hood, plastic controls, and a metal mount. With the click switch set to on, the aperture ring feels chunky with well-defined clicks between each one-third stop from f/1.8 to f/16. With the click switch set to off, there’s an even resistance to the aperture ring movement, and not quite as fluid as the rubberized focus ring. The lens also has a customizable focus hold button and focus mode switch.

The front element uses a fluorine coating to repel water, dust, and fingerprints. While shooting close-up photos of my dog, more than once she smudged the lens with her nose in excitement, but cleanup was just a quick wipe away. Depending on how careful you are, the 9.8-inch (0.25-meter) minimum focus (distance from the sensor to the subject) combined with an ultra-wide field of view means things may be moving in closer to the bulbous front element than intended, so easy cleaning is a big plus. Overall, the lens is also dust and moisture resistant to the same levels as the rest of the most recent G-Master line.

As a side note, when the camera is off it is normal for the lens to have a moving piece inside of it. This is the focusing element sliding back and forth with no power to hold it in place. With the 14mm GM and the way it’s designed with the focusing groups at the very back, you can watch it moving when the lens is detached. I get a lot of people asking me if their new Sony lenses came damaged and this is always the culprit for that fear.

Corrective features inside the 14mm GM to improve image quality include two XA elements, one aspherical element, one Super ED element, two ED elements, and Nano AR Coating II. Overall, I found the lens hits its peak between the apertures of f/4 and f/8. That being said, I was impressed with the lens across the board and there’s no f-stop I wouldn’t use.

Looking over all the RAW photos I shot, there was very little color fringing to be found. Virtually none at 1:1, but if I went on a search mission at 3:1 there would be traces of it in the usual places, such as thin tree branches against a bright sky. With lens profile corrections coming any day to RAW processing software, even these trace amounts would vanish before you know they’re there.

As for vignetting, it exists most heavily at f/1.8 and f/2. It takes its first big jump toward clearing up at f/2.2, and then by f/3.2 it essentially disappears with no difference between that and stopping down more.

The 14mm GM is a sharp lens. Do you know how I know it’s a sharp lens? Because it exhibits the same issue a couple of other super sharp Sony lenses have: the JPEG photo shown on the back of the a7R III is notably crunchy from being over-sharpened in-camera. Below are full crops showing center sharpness at f/1.8, f/4, f/8, and f/16. To my eye, the lens is sharpest at the center when stopped down to f/4. While most of the aperture range performs quite well, the diffraction all the way down at f/16 takes a toll on sharpness.

Looking at the corners, there is sharpness to be gained by stopping down the lens, but you may not realize it unless you are doing direct comparisons like this. Realizing the first photo below is the far corner of a 14mm full-frame lens at f/1.8, I would call it superb performance under the circumstances. It’s only when bringing the aperture down some that we see it gets even better. At f/8, the corners of the lens reach their peak sharpness. As we saw with the center sharpness, the effects of diffraction also creep in at f/16 to make the image a touch softer but absolutely usable.

Once the lens profile corrections are added to firmware updates and popular RAW processing software, any minimal tweak needed to correct barrel adjustment should have virtually no effect on the original composition.

The autofocus uses two XD linear motors at the rear of the lens to move the smaller focus groups. Overall, the autofocus speed is snappy. There is a hushed grinding noise when the autofocus moves from one extreme focal distance to the other, and a gentle vibration can be felt in the grip of the camera. Much more relevant to real-world shooting, however, is that while actively tracking something with any focal distance change, no sound can be heard or vibration felt.

The Sony 14mm f/1.8 GM is a very appealing lens to those who crave fitting the most into one frame in terms of both field of view and light gathering. For low-light shooters, the aperture can be the difference in shooting something at ISO 8,000 with a 14mm f/2.8 lens or ISO 3,200 with the Sony 14mm f/1.8. At high ISOs, your camera can either handle it or it can’t, and this 14mm f/1.8 gives a big boost in what’s possible.

It’s not just these photographers that will find this seemingly niche focal length useful. With the distortion control, outstanding sharpness, shallower depth of field, and quick autofocus system, it’s become a more versatile lens that could fit its way into anyone’s camera kit.

The most direct comparison to Sony’s 14mm f/1.8 GM comes from the Sigma 14mm f/1.8 DG HSM Art. Seeing as they are comparable in price, though, it’s hard to imagine Sigma winning in every category against this G-Master lens, especially when there’s a world’s difference in weight and size: Sigma’s E-mount model measures in at 5.9 inches (152 millimeters) long by 3.8 inches (95.4 millimeters) in diameter. That’s two full inches longer than Sony thanks in part to their built-in mount converter. The weight difference is also substantial: The Sigma weighs 2.7 pounds (1,230 grams) versus the 1 pound (460 grams) of Sony.

Looking at a 14mm lens that’s similar in size to Sony, and we are back to the Rokinon (also goes by Samyang) that I mentioned early on in this review. The Rokinon 14mm f/2.8 AF is one and a third stop slower than the Sony, however it at least costs about $1,000 less, too. If you’re looking for peak optical quality and all the light-gathering you can get at 14mm, this might not be enough for you. But as we’ve seen with the success of Rokinon lenses through the years, the quality-to-price ratio is fair to many.

Lastly, keeping it within the Sony lineup the Sony 12-24mm f/2.8 GM is about $1,000 more expensive than the 14mm f/1.8 GM, is one and a third stop slower, but at the end of the day it can zoom and therefore take the spot of multiple lenses in a bag if versatility is of key importance to you.

Should You Buy It?

Yes. Not only is the Sony 14mm f/1.8 GM an optically wonderful lens with excellent sharpness throughout the image and controlled distortion, but it’s also all housed in a package that beats the pants off of its current main competitor in Sigma. The f/1.8 aperture with a wide field of view has obvious benefits to nighttime shooters, but the possibility of a shallower depth of field at an ultra-wide focal length can create compelling photos anytime.

What Can it Mean to Truly Collaborate as a Photography...

ELI5: This is How Image Stacking Reduces Noise and Recovers...

Sony a7C Images Appear “More or Less Identical” to Those...

Review: Monogram Creative Console - a refinement of our...

Square not revisiting its Bitcoin allocation, but still...

Square appears content with its Bitcoin holdings for now. Over the course of 2020...

‘How Did You Shoot That?’ A Common Question, But is it...

Of the many questions I receive from my students and from viewers of my photographs,... Dual Camera Platform Tries to Fix the Issues with 360-Degree...

Researchers have designed a new, dual camera platform with the aim of making up... Xbox Series S just became a no-brainer thanks to this awesome...

Commentary: FPS Boost is incredible, but I'm still not completely satisfied with...

The Best Way to Get a VR Workout (That's Also Fun)

Strap on that headset and grab your controllers. It's time to sweat.

Altcoins pop while Bitcoin looks for support near $50,000

Bitcoin bulls struggle to push BTC price above $50,000 while ADA, MATIC and other...