The bitcoin price retraced from its upside weekend session against the prospect of an ongoing rise in US borrowing costs.

The bitcoin price retraced from its upside weekend session against the prospect of an ongoing rise in US borrowing costs.

As of Monday, the BTC/USD exchange rate held support above $50,000 following a pullback from its early Asian session high of $51,846. Its modest declines appeared on profit-taking sentiment after Bitcoin closed the previous week up 12.71 percent, according to data provided by Coinbase, a US-based crypto exchange. 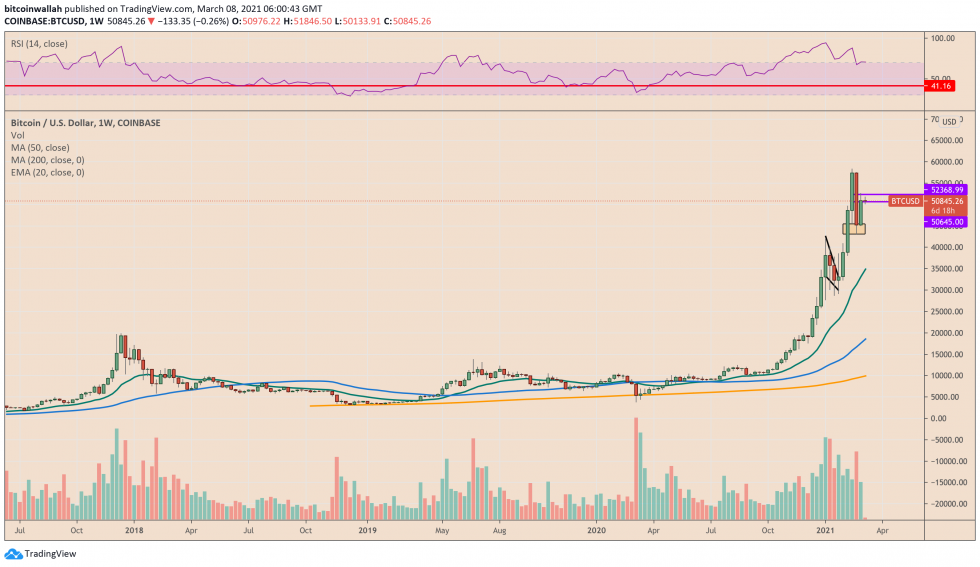 Bitcoin holds $50,000 while feeling pressure from the US yields market. Source: BTCUSD on TradingView.com

Nevertheless, the last week’s upside momentum came in response to Bitcoin’s bearish stretch in the week ending February 28, wherein it fell by more than 21 percent, logging its worst seven-day performance since the coronavirus sell-off in March. The price action shows a medium-term uncertainty among traders.

Bitcoin could correct lower to stay in course with its weekly choppiness. Traders are likely to realize their short-term profits against macroeconomic uncertainties led by a dramatic rise in the US government bond yields. Meanwhile, big firms with a long-term bullish outlook on Bitcoin might absorb the selling pressure from retail traders.

Last week was the same. Bitcoin prices surged on Monday as the sell-off in the US Treasury market calmed but went choppy as the Federal Reserve officials, including chairman Jerome Powell, ignored to provide any forward guidance on rising rates. At one point in time, on March 5, BTC/USD had fallen to as low as $46,219, down 12.24 percent from its week-to-date high. 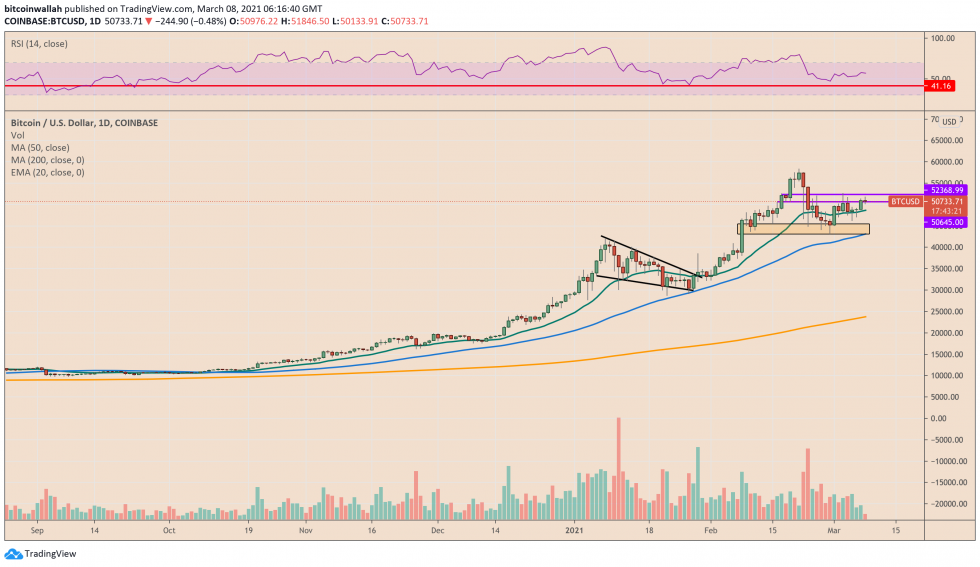 The same day, business intelligence firm MicroStrategy announced that it had purchased $10 million worth of BTC at an average exchange rate of $48,888. The Nasdaq company’s latest purchase bought its net Bitcoin reserves to 91,064 BTC, currently worth $4.63 billion. It has made more than 100 percent in profits so far through its relentless crypto purchases.

Two days later, Bitcoin was rising all over again. The cryptocurrency surged to as high as $51,549 as of March 7.

The Senate passed US President Joe Biden’s $1.9 trillion coronavirus stimulus bill on Saturday after making adjustments to its direct payments provisions. A part of Bitcoin’s upside sentiment also took cues from the prospect of more US dollar liquidity into the system.

Meanwhile, Bitcoin faces headwinds from a potential rise in the US Treasury yields. The interest rate returns on the 10-year government note surged to 1.607 last week—the best level since the pandemic began—before subsiding lower to 1.585 percent on Monday.

With Mr. Powell deciding to follow a wait-and-see approach ahead of the Fed’s interest rate decision on March 17, it appears a lack of the central bank’s intervention would keep pushing the long-dated yields higher. A further boost could come from the speedier vaccination programs and the $1.9 trillion stimulus package, which may increase investors’ expectations of a faster-than-expected US economic recovery.

In turn, key market themes may continue to pressure Bitcoin lower despite institutional purchases. The cryptocurrency is now testing its major key resistance hurdle inside the $50,000-52,000 area.

Indictments issued for BitMEX senior team are a signal...

Ethereum and hodling: What to expect from ETH 2.0

Woman Arrested for Posing as High Schooler To Get Instagram...

A Florida woman, and former police officer, was arrested on a litany of charges...

Hubble and Gemini North team up to peer at Jupiter at the same time. Apple employees circulated a petition on Wednesday to express concern over a new...

Beyond the boundaries of our solar system, a gentle rain of plasma falls.

Thanks to a combination of the pandemic, late-stage capitalism and people being...

When dollars meet the hype: The biggest NFT hits from celebrities

Nonfungible tokens continue to drive millions of dollars in sales. Here are the...

It appears that Nikon is beginning to discontinue its F-mount lenses. Seven lenses...

How to Photograph Couples: A Detailed Tutorial

I am a professional wedding, portrait, and fashion photographer, and have almost... They won't be cheap, but if you're looking for a PS5, another drop like this could...